As the U.S. Space & Rocket Center is currently seeking donations to help Save the Saturn V, I thought it would be appropriate to post the article I mentioned earlier about what exactly it takes to restore one of these things! I’m afraid that I am not allowed to show the amazing photos that were in the article…for those, you’ll have to order a a copy. Finally, I’d like to thank the authors for giving me their permission to repost this article. 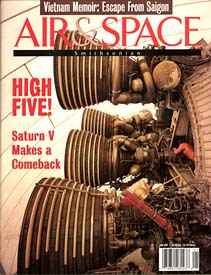 by Frank Winter and Scott Wirz

As originally printed in the December 1996/January 1997 issue of Smithsonian’s Air & Space Magazine.

Picture yourself washing your car. It’s an easy enough job, right? Something you could do in about 45 minutes on a Saturday afternoon. Now imagine that you are washing 50 cars with a toothbrush while working 45 feet in the air inside a greenhouse. That should give you an idea of what it took to restore the giant Saturn V moon rocket now on display at the Kennedy Space Center in Florida.

When the Apollo program concluded in the early 1970s, NASA turned the hardware that remained over to the National Air and Space Museum. Included were enough flight-ready or ground-test states–approximately 645 tons of hardware–to assemble three Saturn V rockets. For some 20 years, the 363-root launch vehicles have remained on outdoor display at or near NASA centers in Florida, Texas, and Alabama (see “The Others,” p. 33). But while they’ve amazed millions, the rockets have fared poorly in their high-humidity environments.

During a five-month period last winter and spring, however, the Florida Saturn V was given a $1.7 million restoration–in founds privately raised by Kennedy’s visitors’ center–to prepare it for installation in a new facility built in its honor. A small team of Museum specialists, ourselves included, coordinated this sometimes grueling, often enthralling task: the restoration of the largest artifact in the Museum’s inventory.

The three-stage Saturn V has long been associated with superlatives. Built to send 100,000 pounds of payload to the moon, it is the largest rocket ever successfully flown. The five enormous Rocketdyne F-1 engines that powered its first stage are the most powerful single-chamber engines ever built. Producing 1.5 million pounds of thrust apiece, they consumed some 2,300 tons of fuel, which was carried in tanks with a total capacity of 561,000 gallons. All this for the rocket’s first 2.7 minutes of flight.

Of the 15 flightworthy Saturn Vs built, 13 were actually flown: One, in a two-stage configuration, launched in the United States’ first space station, Skylab, in May 1973. The remaining 12 were used in Apollo missions. Ten of these were manned; six resulted in landings on the moon.

The rocket was not built to endure the stresses of exposure on Earth, however. Twenty years of serving as a prominent landmark and popular tourist attraction at Kennedy had taken its toll. On closer inspection, the rocket’s deterioration was far worse than originally thought. To keep the launch vehicle as light as possible–affording more weight to its payload, the Apollo spacecraft–the Saturn’s skin was manufactured mostly of thin-gauge aluminum. Unfortunately, aluminum corrodes readily in salt air. Explains chemist Bayne Rector of the four-man Museum team, “When aluminum corrodes, it exfoliates into brittle layers that easily flake off, like pages in a decaying old book.”

Apart from exfoliation, there were gaping tears, rusted rivets, frayed wire, and fungi and other plant growths. The rocket was also littered with innumerable red berries and small fish bones brought in by blackbirds called grackles, which had made the Saturn their home.

The first step was to house all but the oversized first stage in a cavernous, 20,000-square-foot, air supported tent to protect the work and provide a controlled environment. (The first stage was later tented alone.) Next, the restoration crew power-washed the Saturn and its spacecraft with high-pressure streams of water. Applied at pressures of up to 3,000 pounds per square inch, depending on the fragility of the material to be sprayed, 50,000 gallons of water were required for the first washing alone. “The power-washing got out a lot of dirt, bird droppings, bird nests, and other debris,” says Rumanian-born Nick Bolea, a cheerful figure whose unofficial duties included serving as the crew’s wildlife expert. Birds, turtles, opossums–even an alligator he named George–were frequent visitors to the site. Power-washing also produced a mysterious purple liquid–runoff, as it turned out, from the berries that had once served as food for the Saturn’s former inhabitants.

And the process took care of another problem: mildew. Almost a third of the rocket had a greenish hue, which the crew tackled by adding about 120 gallons of disinfectant to the water. The green was so pronounced on the first stage that Nick was able to write the name of his employer, “Thomarios”– an Ohio-based painting company and the job’s chief contractor–in five-foot letters with his spray wand.

The rocket had been repainted several times while on display, and in places it had eight layers of paint. To remove it Thomarios’ experts used a combination of two techniques. A device known as an ARMEX machine, which operates with a deafening screech, blasted away old paint and light corrosion with fine grades of ordinary baking soda. Its great advantage for this job was that it could strip paint without etching the metal. But while the ARMEX worked beautifully on loose paint, it failed to remove well-adhered paint and corrosion. That job fell to a lightly coarser abrasive made from a volcanic sand.