So I was at the library studying for an exam today when, not really wanting to study at that moment, I started perusing the bookshelves near me and, quite literally, at the very last bookshelf at the back of the room in the corner bottom rack, I found a book from 1976 titled, “Werner von Braun” by one Erik Bergaust. 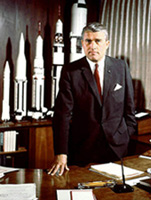 I flipped through it a while and looked up “Alabama Space & Rocket Center” in the index and found a passage telling about the arrival of the Saturn V to the museum that I thought would be worthwhile to share here, as I know I myself have heard at least two somewhat different stories as to how it got and stayed in Huntsville.

When the [Space & Rocket] Center was conceived in the mid-sixties, Saturn rocket stages were scattered all over the United States. They had been used by a variety of contractors and other Apollo program participants for a number of tests and shop work. As the Center developed, von Braun put out the word to have the Saturn I and Saturn V stages returned to Huntsville for even more testing, and when the hardware arrived and all the other testing had been completed, von Braun made arrangements to have it assembled for “a final transportation test.” It involved hauling the stages the six miles from Marshall to the Space Center. Once they arrived there it was decided to store them for safekeeping in the event additional testing became necessary…

So it would seem this is how he got all the parts there. Quite resourceful indeed!