If you haven’t noticed, the U.S. Space & Rocket Center has been getting into Social Media in a much bigger way than in years past. I dare say they’re beginning to embrace it. I might even go out on a limb and state that the powers-that-be might have figured out that it’s savvy business sense to keep your customers engaged with your product for more than one week out of the year.

What they haven’t seem to have shaken though is the same partisan politics that has polarized much of the nation for the past 10 to 234 years.

If you decide you want to let everyone know that you’re a fan of the U.S. Space & Rocket Center on Facebook, you might be perplexed to see, as the screenshot below shows, of all the different people, places, and events the Space & Rocket Center could list amongst its favorites, only Massachusetts Senator Scott Brown has made the grade.

The Marshall Space Flight Center, or NASA as an entire organization just don’t seem to make the cut. How about the Kennedy Space Center? Dottie just launched into space from there.

What about the Great Moonbuggy Race, perhaps? After all, you do host that event.

Right now it smacks of a social media platform being driven by someone at the Center letting their political view seep in, if only just a little bit.

People that wouldn’t count Sen. Brown amongst their favorites visit museums and send their kids to Space Camp, too, and seeing a somewhat polarizing political figure (aren’t they all, these days) may not be putting your best foot forward.

And I don’t think you can afford to alienate anyone, left, right, or center. 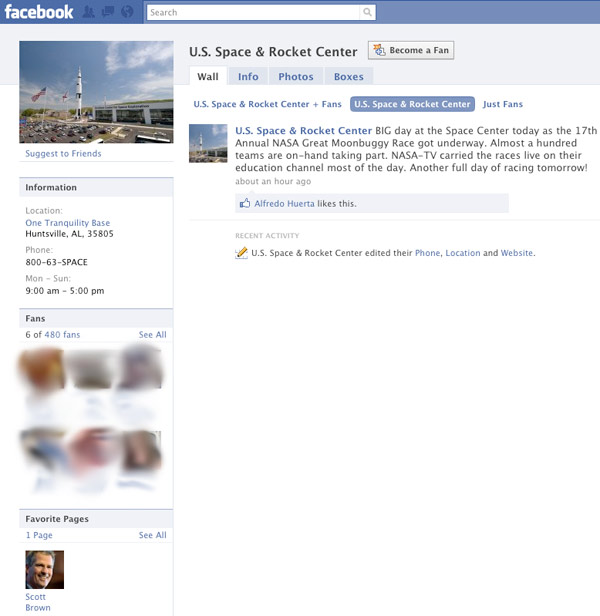