ISC from a Teacher’s Perspective

Today marks the beginning of the 2012 session of International Space Camp!

Teachers and students from ten countries have arrived for a week at Space Camp!

After returning from last year’s ISC session, Lisa Ellen Thorsen, an educator from Norway, provided an overview of the experience to The Norwegian Space Centre, sponsors of the Norwegian International Space Camp contingent.

She was kind enough to translate that report into English.

Her group’s trip was clouded somewhat.  You may recall the fatal shooting that happened while the trio was en route to Alabama, as Lisa spoke so eloquently about the tragedy at the beginning of Norway’s presentation.  Needless to say, it factored into the report as well.

A report to my sponsor, the Norwegian Space Centre

In the early morning of July 22 I met student participant Lene at the airport. We enjoyed an uneventful trip to Amsterdam and then on to Atlanta where we met the other student participant, Kristian. The airport at Atlanta is very large, so it is important to head to your gate early. The airport has an open and pleasant atmosphere with many opportunities for getting a good meal at all the terminals. There were also stores in which one could purchase magazines and souvenirs.

When we were at the airport in Atlanta, we received a text message from Lene’s father about the events taking place in Oslo. We found a television at the gate and sat down by it to keep appraised of the situation. The next few hours seemed very surrealistic with us being overwhelmed by what we saw while most of the people around us were quite unaware of the situation and engrossed in their own worlds.

Eventually the airplane for which we had been waiting arrived, only to be delayed due to repairs and ultimately fail its final check. At that point there were no other airplanes available and, after 9 hours at the airport, we were given vouchers for hotel rooms. 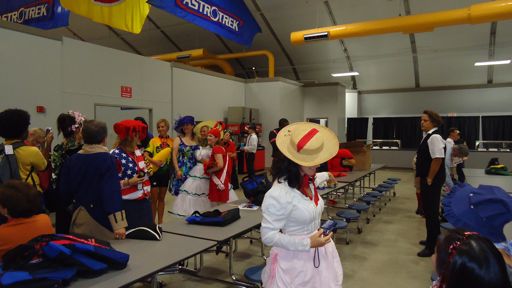 NOTE! The rules in the USA are such that a minor can not sign for a room, and as a consequence, can not rent a hotel room. If the students had been travelling on their own, they would have been denied rooms and would have had to spend the night at the airport. Therefore it is very important that they travel with an adult. Apparently, delays of this sort are not unusual in and out of Huntsville.

At first we were placed on three different airplanes but, after taking the matter up with personnel at the service office and not at the gate, we were given tickets on the same airplane. We arrived in Huntsville just in time for the opening ceremonies and went through with our presentation after first having informed the audience of the situation in Norway and observing one minute of silence. 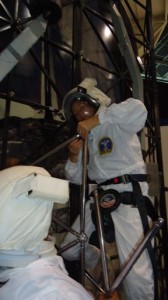 I had expected the program to have academic depth, both within science and pedagogics. Since I was accepted to the program at the last minute, I had not had time to review previous reports regarding the International Space Camp. I found that many of the classes did not have the scientific depth that I had hoped for. They did, however, provide many fun and fascinating pedagogical ideas. 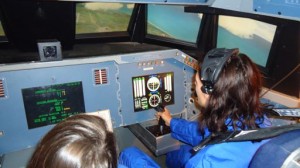 The teachers were able to participate in many of the same activities that the students were subject to, and we were taught many different activities that we could bring back to the classroom. I truly enjoyed getting to know the members of my team and working with them to solve the challenges we were presented with. We built rockets, heat shields, Mars landers, toys and much more. We were “astronauts” in the shuttle simulator, on the International Space Station and in the control room. We also participated in several lectures and presentations by astronauts, authors and rocket designers, which for me were among the highlights of the week.

We stayed in nice and clean student housing with four bedrooms, two baths and with a common living room/kitchen area. I enjoyed sharing a suite with three teachers from the USA and getting to know them. Every morning we were met by a bus which drove us to the Rocket Center and we returned by bus in the late evening. It was not possible to return to the rooms at other times during the day. 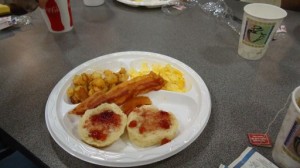 The food was, as expected, greasy, sweet, and in great quantities. Nonetheless I would like to point out that there was a good salad bar offered for each lunch and dinner meal, and a good selection of vegetables for dinner. If it is important to taste everything, you should expect to leave the table slightly sick to your stomach after all the grease and carbohydrates, but, if you  make some smart choices, it is possible to get a decent meal. Breakfast was typical American, with eggs, bacon, sausages and potatoes, but there was also fruit, yogurt, fruit juice, cereals and biscuits. The day after camp was over, another foreign teacher and I went out to a Thai restaurant and the food was delicious and inexpensive. Unfortunately, there was no time for eating out during the week.

One evening the teachers had a party where they, among other things, exchanged gifts and pins from their states. For this occasion it is wise to have pins from Norway, or from the Norwegian Space Centre. In addition, I would advise bringing 3-5 gifts for those teachers with which you share a room or other teachers that you particularly connect with, for example refrigerator magnets, small trolls, etc. Last, but not least, it is important to bring gifts to the ladies from the ”de Midi” organization, who invite 3-5 of the camp participants to their homes, together with other couples from their organization. It may therefore be a good idea to bring several gifts, one for the host couple and then some for the others from the ”de Midi”. I brought a calendar of Norway, a mug with moose on it and a short book about the Aurora borealis.

The week at camp was an eventful week which left me with many impressions. It was emotionally challenging to go through a hectic day of classes while at the same time being concerned about the situation in Norway. Fortunately, I was not directly affected by the tragedy and my daughter’s close friend, and also our neighbor, returned safely from Utøya without physical harm. Every evening I was on the phone with my children who were upset and struggled with insomnia. My daughter had been just north of Utøya when the tragedy occurred, and wasn’t able to return home that evening. I had been in the area of the first explosion in downtown Oslo the day before the terrorist attack. The events in Norway seemed so close and personal to me, where I live as I do, about midway between the two attacks. The other teachers at Space Camp were very supportive and understanding, but at times it was almost too much sympathy. In a small way I appreciated being able to lose myself in the classes, in space exploration and space rockets that week.

During the week at Space Camp, I participated in many stimulating discussions with the other teachers and I enjoyed getting to know people from different cultures. I was truly inspired by their passion and commitment to their profession. The experience of the activities in which I participated, has provided me with many ideas for the classroom, while the people that I got to know, have inspired me further in my career as a teacher.

I would particularly like to thank the Norwegian Space Centre for allowing me to have fantastic experience! 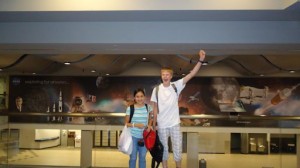 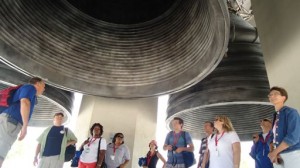 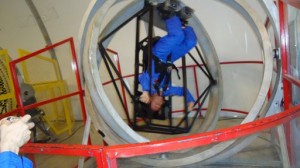 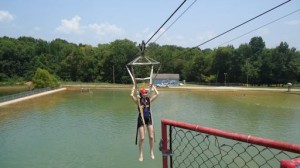 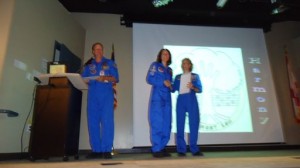