Any shuttle launch is a very exciting and special event.

But STS-131, scheduled to lift-off from Launch Complex 39-A tomorrow at 6:21am EST, is particularly special for Space Camp. 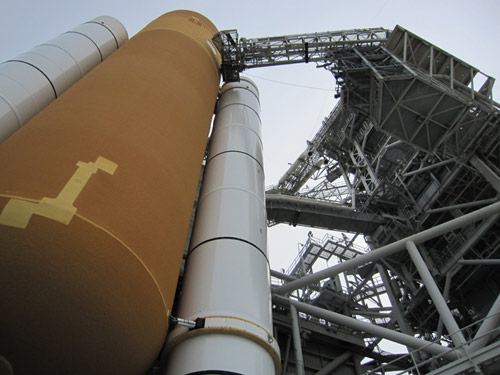 Representatives from Space Camp are down at the Cape right now to witness the launch, and as you can see above, Discovery’s sitting on the pad, ready to go!

Be sure to check out Space Camp’s Twitter Feed for their updates from Florida.

Dottie has been kind enough to take with her to space a full complement of Space Camp, Space Academy, and Aviation Challenge wings!

For a stroll down memory lane, check out Dottie’s Hall of Fame induction video from 2007. She was a recently minted astronaut at that point, preparing even then for the fantastic voyage on which she’s about to embark: