Last October, I caught sight of the Space Camp logo we all know and love morphing into a new logo we weren’t so familiar with and the words, “Prepare for New Beginnings 2013” emblazoned below it.  The new logo was presented at the end of a Space Camp promo video that had been uploaded to by Space Camp to their YouTube Channel. 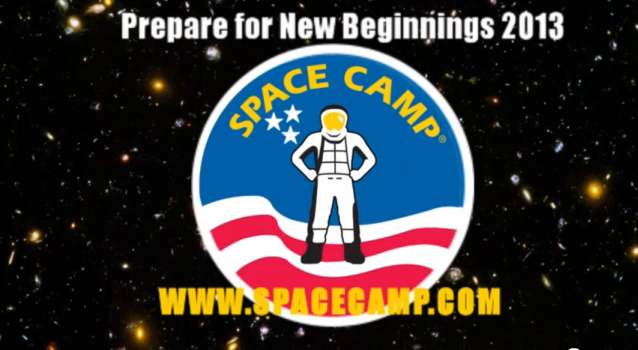 But the morphing of logos in the video seemed to indicate that the new Robotics logo had been chosen to replace the current Space Camp logo.

Adding fuel to the fire, Space Camp pulled the video off YouTube the day after my post.

I have heard recently from several sources that this new logo has been officially given the okay by Deborah Barnhart, the CEO of the Space & Rocket Center, to replace the current Space Camp logo.

Last October, I withheld my opinion on the logo itself, first because nothing was official and second, while reaction to the new logo in the HabForum was swift and negative, I didn’t share quite the same visceral hatred for it.

I will now weigh in with my opinion, if only because I have this website and a keyboard!

But it’s not a good Space Camp logo.

With such a monumental change, I feel it’s important to ask certain questions that, though they may seem obvious, I’m not sure have been considered.

I have provided my own answers.  Feel free to play along and see what you come up with:

Is this the right time?

The Shuttle program has ended, sure.  But it’s by no means gone from the public consciousness.  With the retirement of Discovery, Endeavour, and Atlantis, the Space Shuttle actually seems to be getting more positive recognition these days than the previous two out of three decades of its actual use!  While the retirement of the Space Shuttle Program certainly provides a good argument for a logo change, perhaps that time is not quite yet.

Further, Space Warriors is due to be released in a few months.  It was shot this past summer at Space Camp.  The current logo is bound to be prevalent in the movie.  Changing the logo now brings the possible risk of creating confusion among would-be campers and their parents.  They’ll see the movie, make their way to spacecamp.com and be confronted with a new set of logos that seem familiar  but it will probably create at least some minor amount of confusion in a lot of new visitors’ minds.

Is it even a good Logo for Robotics?

A proper (albeit possibly clichéd) Space Camp Robotics logo would logically feature a NASA rover or rover-looking ‘thing’ on another planet, one would think.  Curiosity, specifically, could look rather spiffy in front of the red, white, and blue of the logo’s background.

If it’s not a very good logo for the Robotics program, can it be good as the Space Camp logo?

Have we prepared for the change?

To the best of my knowledge (which is probably quite limited, granted), I know of no branding professionals being brought in for consultation.  I don’t think any focus groups have been convened.  I don’t think any real work has been done to ensure that this change will only benefit the Space Camp brand going forward.

As annoying and valueless as such a process might seem, such a major change to such a famous brand should not be attempted without understanding the full ramifications of that change.

The current Space Camp logo has been in use for a quarter of a century!  Change can be good, but is it a good idea to make such a radical change in such a cavalier fashion?

Does the new logo even need to resemble the old logo?

In the forum discussion over the possible new logo, Brian Matney presented a refreshing new idea for the logo: 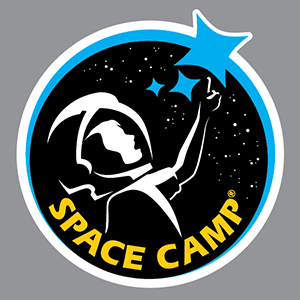 Now, I personally don’t think it’s quite right to replace the Space Camp logo, but I do think that, objectively, it’s a good design.

It shows the sense of wonder kids feel at Space Camp and it maintains the spirit of the current shuttle logo, but yet looks almost nothing like the current logo.

In fact, if Space Camp decides to get the shuttle off of the Space Academy for Educators logo, I do feel that this would be a fantastic replacement for that program.

Have we forgotten who goes to Space Camp?

There’s no way to put this delicately, so I just have to say it:  Anywhere you put the new logo, man bits are bound to appear.  I guarantee it.

I’m a 30-year-old, remarkably mature man.  And yet my first impulse upon seeing the new logo is to go make such additons!

From this, I can extrapolate for you two things.

Seriously, this new logo is just begging for it!  Just look at it!  There’s an astronaut, hands on his hips, standing erect.  Once you…accessorize…it, the front of the space suit even starts looking a lot like a set of six-pack abs.  That Space Camp logo is ripped!  There he’ll be, standing so proud, fully on display and just a little too happy to be at Space Camp!

Bottom line: anywhere the logo appears, such additions are sure to follow.  The janitorial staff at Space Camp is quite good, but pictures are going to end up on the internet of the Space Camp logo with edits made to it.

I’m not an expert, but that can’t be good for the brand.

Is this change in any way ego-driven?

Have those in charge of creating and approving this new logo looked into the mirror and asked themselves honestly, “Is moving forward with this change in any way driven by anything other than doing what’s right for Space Camp?”

In other words, when the someone who has an idea for a revised Space Camp logo is also in or near a position to change the logo, is the motive driving the change potentially coming from any place other than the desire to act in a manner that is truly best for Space Camp and the Space Camp brand?

Is there any chance–however small–that less-than-noble, possibly ego-driven intentions have factored in to the desire to change the Space Camp logo to this new astronaut logo?

Is this a better logo?

At the end of the day, a new logo must be at least as good as–and preferably better than–the old logo.  if a new logo isn’t as good or better than the old one, it should not be used.

Think back to the last time Space Camp changed logos and compare the transition to this new logo.

Clearly the last time the logo changed, this simple test of “is it as good as or better than the old one” passed with flying colors.

Can you look at all three side-by-side-by-side and say that now?  I can’t.

This logo is not better than the current logo.

Again, it’s not that I feel the logo is horrible, it’s just not good.  It’s New Coke.  Sure, it’s okay.  But it’s worse than what came before, so why would anyone bother?

This new logo is not up to par.  Space Warriors will be out soon.  Atlantis has yet to even go on display.  Don’t change the logo this year.  It’s February.  There’s plenty of time to work on a better logo and give that a careful, measured roll-out for 2014.  It can make it into the 2014 brochure fully.  The website can be updated.  An introductory, celebratory event can be held.

Despite the fact that the change has already been approved for the new Space Camp logo, it’s not too late to do better.

But it will be soon…

Bonus question:
Isn’t a change of this magnitude something the Alabama Space Science Exhibit Commission board would have to approve?